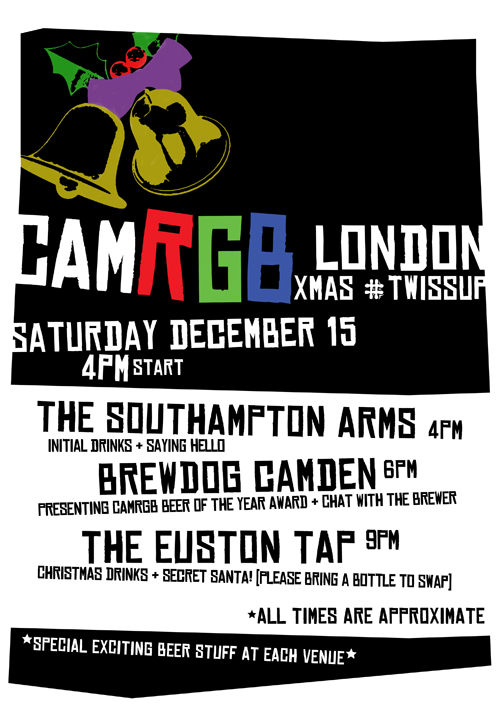 While I was in Colorado last month I realised that I had almost reached the personal milestone of 50 blog posts and as my writing tends to be on the verbose side I viewed this as a large personal achievement. I was thinking about what I wanted to write about for this, my 50th post and what dawned on me was how blogging about beer has brought me closer to a fantastic bunch of individuals who are as loopy about beer as I am. I thought a lot about how I wanted to say this but then I thought, wouldn't it be great to try and organise some kind of meet up around the Christmas period so that I can tell them all to their various faces...

When I got back from America I contacted Simon, founder of the Campaign for Really Good Beer, of which I am a proud member, about organising a Christmas craft beer pub crawl of epic proportions. North London has been my home for seven years and it has become host to a burgeoning craft beer scene over the last couple of years, I simply couldn't think of a better place for this event to occur. Emails were exchanged, tweets were sent and with that the cogs of CRAFT began to grind steadily into motion.

So without further ado I would like to invite one and all to the 2012 CAMRGB London Xmas Twissup! You don't need to be a CAMRGB member to participate but considering that membership is free then I don't think it would hurt to join now, would it? The plan is as follows (apart from the initial meet all times are approximate):

Bring a bottle and take part in a Secret Santa! If you are coming to the Euston Tap then please bring a wrapped bottle of beer for an EPIC game of pass the parcel!

We hope to see you there! If you would like any more information then please leave a comment or harass me on twitter; @totalcurtis.
Posted by Unknown at 21:30