Beer, it’s a funny old thing. Two years ago, a few months after my craft beer revelation I was spending all of my beer tokens on American imports, convinced that this was the only way I would satisfy my lust for big brews dry hopped by heavy handed brewers. Fast forward to today and the majority of the beer I’m buying is brewed in the UK and it’s as good, if not EVEN BETTER than a lot of highly regarded US output. It’s wonderful to know, especially as a Londoner, that there are now (at the time of writing this) thirty plus breweries in London producing wares as varied as single hopped 3% ABV cask conditioned ales to huge 10% imperial stouts aged in bourbon barrels on cacao nibs harvested by small Ecuadorian children. Make no mistake London is fast becoming one of the worlds craft beer capitals and the beer I’m about to review is from one of it’s fastest rising stars, Beavertown. 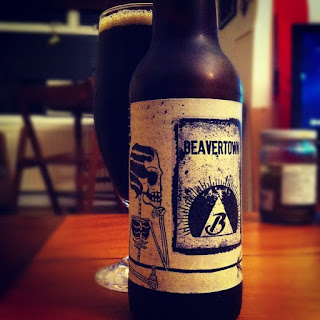 Nestled in deepest, darkest East London lies Dukes Brew & Que, an American style diner that apparently serves the best ribs in town, I’m yet to venture there myself but I’ve never seen anyone less than rave about the place. Behind the restaurant lies the Beavertown Brewery which takes it’s name from the old cockney name for the De Beauvoir area the brewery lies within. Beavertown was founded by Logan Plant, son of legendary Led Zeppelin rocker Robert and his good pal Byron. Like myself Logan discovered his passion for craft beer while out in the States except Logan had his beer epiphany in the hipster joints of Brooklyn as apposed to the wild frontiers of Northern Colorado.

The beer I’m sizing up today is Black Betty Black IPA which is one of my favourite styles. The first thing that strikes me about Black Betty and all of Beavertown's brews is how strong the branding is, it’s modern, stylish and well thought out, it’s definitely something that would catch my eye on a bottle shop shelf. Branding is one thing, taste is paramount, have the Brewers at Beavertown managed to capture the flair of the New York City brewing scene and bring it to London?

Betty (as I’ve come to know her) pours a deep espresso brown with russet tinged edges and manages to produce a nice mocha hued single finger foam head. I stick my nose in and immediately get a wave of pine from the hops, followed by waves of dark chocolate, coffee beans, licorice and even a little lemon and lime. It’s certainly a complex medley of aromas but the sweet strong scents have me wondering whether or not this Black IPA will fall into the ‘hoppy stout’ category. For me a Black IPA should completely befuddle the senses, luring you in with it’s deep, dark colour and then smacking you round the chops with a bushel of hops. If it fails to do this then it's not a Black IPA, it's a hoppy stout, simple.

Young Betty certainly has a roast laden edge but this is followed by big piney resins and a grapefruit bitterness, there’s even a bittersweet edge that almost reminds me of key lime pie. The medium body suits this beer well and there’s just enough carbonation from this bottle conditioned brew to help all those bitter flavours cut through the roasted coffee and chocolate malts, this is definitely a kick ass Black IPA. Just when you think Betty is going to leave a lingering rich malty finish in your mouth those bitter grapefruit flavours suddenly suck the palate dry leaving you gasping for more. After working my way through this beer I’m strongly reminded of Magic Rock Magic 8 Ball, another Black IPA that falls into the slightly more roasted side of this style but still manages to retain it’s identity as Black IPA. Like Magic 8 Ball, Black Betty is a superb beer but with such an array of London brewing talent from the likes of Brodies, Kernel and Redchurch Beavertown certainly have their work cut out but if this beer is anything to go by then they’ll be standing shoulder to shoulder with these great brewers.

Thanks again to Justin for gifting me this bottle, a top beer from a top bloke.
Posted by Unknown at 19:37