Following the success of my sell out 'Introduction to Craft Beer' tasting last month I've been invited to host another event by my friends at The Duke's Head in Highgate Village. We had a long hard think about what we wanted to do next and one idea that stuck was to present a showcase of dark beers that are ideally suited to the approaching long winter nights. As an added twist we thought that we'd pair each of the beers to a complimentary dish making the evening as much about great food as it is about fantastic beers. It is from these ideas that Darker Days was born...

The concept is simple; four exceptional dark beers, each a different style, paired with a complementary dish. With each course I'll provide a tutored tasting and a speak a little on the beer, its story and why I think it matches so well with the dish it's paired with. The menu looks a little something like this.

Trappistes Rochefort 10 - paired with a selection of Truffles Delicatessen cheeses

In addition to this the guys from Hammerton Brewery based down the road in Islington will be along to tell us the story behind their beers. The event kicks off at 7pm with the first course being served at 7.30pm.

Places are very limited and the online allocation of tickets has already sold out! Fear not, there are still a handful of tickets priced at £30 per person behind the bar at the Duke's Head. It promises to be a fantastic evening of great beer, food and chat and I look forward to seeing you there! 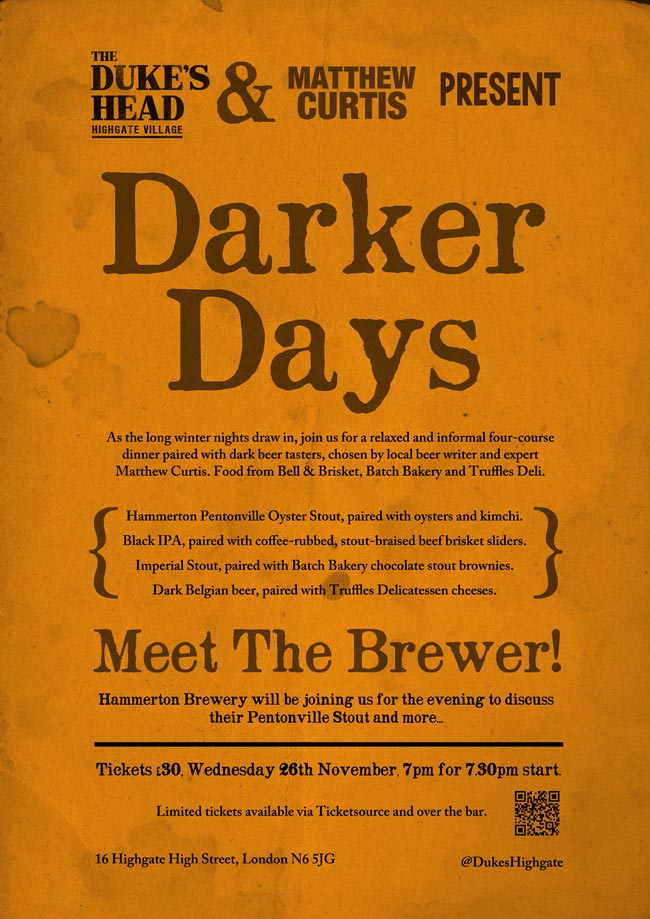