November the 8th brought us International Stout Day and although I had already planned to drink the bottle of Redchurch Old Ford Export Stout that was nestled in my fridge before I realised the date I honestly admit I decided to crack this special bottle open because of it. Back in September you may recall that I visited my Dad at his home in Fort Collins, Colorado and brought a suitcase full of beers back to London with me. I’ve now smashed my way through the lot and one of the last bottles in this epic collection was this beast from the talented brewers at Ohio’s Hoppin’ Frog Brewery, D.O.R.I.S. the Destroyer or Double Oatmeal Russian Imperial Stout if you're getting technical. 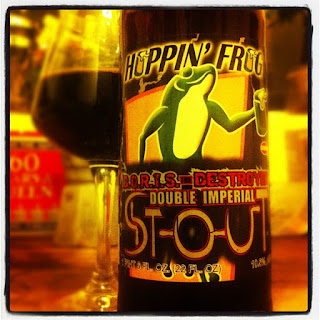 In drinking this, I’m tasting only my second ever beer from Hoppin’ Frog (the first being Hoppin’ to Heaven IPA which I had on draft at the Craft Beer Co) so it’s an exciting occasion let me tell you. Although these beers are available over here in the UK I’ve always been a little put off by the price. Their beers do come in 22 ounce bombers and are usually very strong, this beer for example weighs in at 10.5% ABV but you can often get two or three very good bottles for the price of one of these so in the past I’ve left them alone. I didn’t need to worry about that on this occasion though as I half-inched this bottle from my Dad’s fridge, thanks for the beer Dad.

I’m unashamedly drinking this decadent bottle all by myself and I’m starting off with it at fridge temperature so I can see how the flavours evolve and develop as this beer gradually warms to room temperature. Before I start talking about this beer I just want to have a quick word about Hoppin’ Frogs labels, I mean, a lot of effort clearly goes into the masterful production of the beer so would it hurt if the same amount of effort went into the design of the label? Both of the beers I’ve had from this brewery have as been as elegant as they have delicious so I’d love to see the same level of elegance on the side of their bottles, anyway, on with the tasting…

D.O.R.I.S. pours as black as a bottomless oubliette, a tiny milk chocolate head forms but it is soon pulled back into the infinite darkness and if you stare too hard at this beer I fear you too may be pulled into the abyss. The aroma is of licorice, molasses and soy sauce, there is a meaty umami underpinning the sweeter flavours and there's also hints of burnt, smoky oak and peat. To taste it’s not as full bodied as I was expecting, the high level of alcohol strips away some of it’s form but doesn’t detract from the overall enjoyment you experience when drinking this beer. The bittersweet flavours of dark chocolate, black treacle, licorice and coffee are the first to arrive at the party, the late comers have brought with them a platter of teriyaki coated meats and some fine cigars which leave a tobacco like note lingering along with a rush of warming of alcohol as it slides down your throat.

The alcohol becomes more noticeable as this beer reaches room temperature as do small hints of rich fruitcake flavours which add to the overall richness of this beer. It’s a little too big for it’s boots to be well balanced but on the whole it’s a wonderful beer packed with some seriously dense flavours. I only wish that I had shared this bottle rather than gluttonously keeping it to myself, it’s a big bottle that’s definitely made for sharing. Towards the end of the bottle I decided that it might pair nicely with a good bourbon and so I poured myself a nip of Wild Turkey Rye. The sweet, vanilla flavours of the bourbon merged beautifully with the meaty flavours in the stout and I actually thought it enhanced the already complex qualities of this beer.

All in all, a pretty fabulous drop but once again, I wish I’d shared it amongst friends. If you’re feeling flush can you lend me a tenner and you want to try this for yourself then you can usually find Hoppin’ Frog beers in stock at Beers of Europe but don’t expect to get much change out of £13.00 for your bottle of D.O.R.I.S. Money well spent if you ask me.
Posted by Unknown at 15:15