I’ve been harping on about some great American beers in my last couple of blog posts and so I’m really happy to be able to turn my attention to some excellent local beer at last. It’s all well and good talking about really great beers but for me the review is wasted unless you can actually get out their and experience the said beer for yourself. Fair enough quite a few of you reading this are in America and you can get hold of some of the super beers I’ve been writing about recently pretty easily but today’s beer, Redchurch Old Ford Export Stout is brewed in Bethnal Green, East London which is less than 10 miles away from where I’m currently sat. That means that I can implore anyone in the UK to go and get hold of some fantastic Redchurch beer after they’ve read this post, I promise that you will not be disappointed. 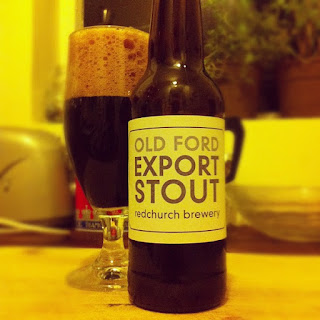 I came across Redchurch beers earlier this year quite by accident, I like to think that I’m pretty clued up on my local beer scene but up until a few months ago this new brewery had passed me by. I had actually popped into my local branch of Oddbins to pick up some beer from another East London Brewery, London Fields when I spied the simple yet eye catching designs of the Redchurch labels. I left with the London Fields beers I had intended to purchase, but also bought some Redchurch Great Eastern IPA and Hoxton Stout. I was taken aback with the complexity and deliciousness of these beers, here was a brewer making huge, flavourful beers within spitting distance of my flat that I can pick up in my local off licence, ladies and gentlemen THIS is what craft beer is all about. Before I continue you should take the time to read my friend Justin’s excellent article on Hoxton Stout vs Magic Rock Dark Arts Stout here.

A couple of months ago I noticed that my local branch of Oddbins, which has wholeheartedly embraced the London craft beer scene and is stocking beers from the likes of The Kernel, By The Horns and London Fields just to name a few was hosting a meet the brewer with the guys from Redchurch. Despite at this point having tried all of their core range still I couldn’t resist heading down and asking head brewer Gary a few questions about his operation and besides there was free beer, who can turn that down. Gary was showcasing a new beer this evening, Old Ford Export Stout which at the time I enjoyed so much I asked if I could by some but the store hadn’t taken on any stock yet so I couldn’t! Disaster was averted as Gary kindly gifted me with a bottle and the bottle shop didn’t lose out as I left with another brace of Great Eastern IPA and Hoxton Stout which have become staples in my household. Thanks again for the bottle Gary, I hope this review does this beer the justice it deserves.

By coincidence the day I decided to open this bottle was ‘International Stout Day’ but this didn’t influence my decision to drink this bottle on this particular day as I had planned to drink it last night anyway, the fates had aligned it seems. Old Ford Export Stout pours an impenetrable Bovril brown and thanks to it’s bottle conditioning produces a lively mocha hued head that’s at least 3 fingers thick but soon calms down to leave just around half a finger of foam. The first thing you notice in the aroma are huge waves of manuka honey and molasses and this is followed by hits of coffee and dark chocolate. Buried deep within the aroma is a hint of pine and almost a lavender scented floral note that gives you a clue to the massive amount dry hopping this beer has received.

Old Ford is wonderfully smooth and full in the mouth and isn’t at all cloying or overbearing, there is just the right amount of carbonation to keep this beer drinkable and moreish. The flavours are huge, nothing about this beer is understated bar the bottles elegantly designed label, it starts with freshly brewed espresso followed by butterscotch infused dark chocolate. These rich, sweet flavours eventually make way for a huge wash of pine needle bitterness that adds a dry, refreshing edge to this already complex beer. None of these flavours manage to overpower the others, it’s a masterfully crafted brew and considering these guys have only been brewing commercially for just over year makes it all the more impressive.

I don’t want to sound biased but this is genuinely one of the best beers I’ve drank this year, it’s also one of the finest examples of this style I have ever had, it is a truly wonderful beverage. When it comes to London craft breweries people love to go on about the excellent brews from The Kernel, Brodies and Camden Town but Redchurch have a core range of beers that not only rivals their local brethren but also the rest of the brewing world. I can’t wait to see what the future has in store for this fledgling brewery but as the beer is this good I can only imagine that it’s going to be a very bright one indeed.
Posted by Unknown at 16:33